In bioinformatics a dot plot is a graphical method that allows the comparison of two biological sequences and identify regions of close similarity between them. It is a type of recurrence plot.

More details of dot plot here. Below, some examples of events which can be detected by dot plots.

When two samples sequence are identical, it's a match.

Dot plots can be used to detect a gap between two samples: small sequence which exists only in one sample, between two matching regions.

Sequence which exists in the two samples but not in the same order.

Dot plot can be used to detect repeated regions: a sequence which is repeated several times in a sample. 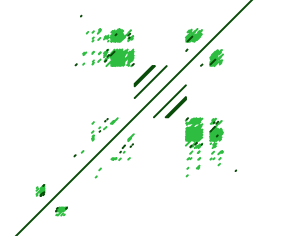